To contribute to the fund, gifts may be sent to Town The 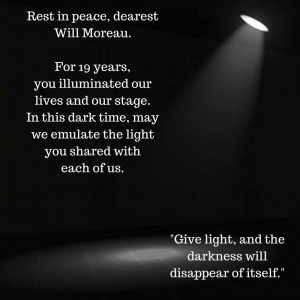 Town was also humbled by the invitation to remember Will at the reflection service held Friday, Nov. 24 at Palmer Memorial Chapel. The remarks, delivered by Town’s Executive Director, Shannon Willis Scruggs, are included below. They were presented on behalf of the Town Theatre board and staff, the many cast and crew members who worked with Will and audiences who enjoyed his craft.

We will continue to remember Will’s family in our thoughts and prayers and stand alongside everyone who is still mourning the loss of this bright light.

“Thank you to the entire family for the invitation to remember Will this evening.

Almost everyone who knew and loved Will continues to struggle with his passing. It doesn’t make sense ~ it doesn’t seem real. I keep waiting for him to run down the theatre aisle, 15 minutes after rehearsal has started, with that hand waving in the air and that sheepish grin on his face as if to say, “yes, yes, sorry I am late…”

But, as much as we want it to, that won’t happen again. And it hurts. And, that is also why tonight is challenging. It forces reality into a situation that has broken many hearts.

One of the first lines on Will’s theatrical resume says, “Will Moreau refuses to fall into any simple/typical category.” On stage, Will took on characters ranging from A to Z. His roster of roles is so varied and complex. And, be it in the ensemble or as the evening’s emcee, Will was fully dedicated to each of his characters, making them his own. His life away from the stage also mirrored that refusal to be “typecast.” Will spent his time involved in and with so many different groups ~ cultural, historical, educational, religious, artistic ~ whether he was the leader or was being led, just like with his stage characters, he was 100% committed.

I am also reminded of how Will would submit a bio for the playbill. It is pretty customary for folks to thank family and friends for supporting them in their shows. And, it is also a pretty regular occurrence for people to send in paragraphs that are a tad long for the available space. And, yes, Will did both. But this is what strikes me now ~ Will’s final sentence in each and every bio that he submitted was almost always identical. He would say, “Will dedicates his performance to God, his family, his true friends and his teachers/colleagues for their support.” Will would take the time to make sure that if anything had to be cut for space, we knew that it was important to leave in that dedication. We could take anything else away, but he wanted that consistent, unwavering expression of thanks to be one of the final statements for an audience to read.

I can only assume the heartache caused by Will’s absence will be with us for a long time. But, I believe there is healing in remembering how he lived. He showed us how to take on life in all of its variety ~ and to do so wholeheartedly. And, in the midst of it all, he reminds us to never forget (and to constantly acknowledge) the support provided through faith, family and friends.”