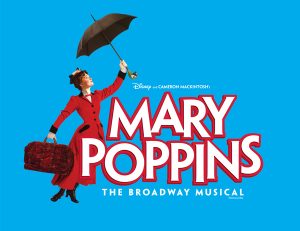 Things are not going well for the Banks family. Children Michael and Jane are out of control and have run off yet another nanny. In the most peculiar way, a mysterious, but practically perfect, woman appears at the doorstep — none other than Mary Poppins herself! Though she has a seemingly daunting task, with a little magic and some help from Bert, an adorable chimneysweep, the Banks’ children have their world turned upside down.

After producing this blockbuster in the summer of 2015 to sold out crowds, Town is pleased to have Mary and crew flying in for the 101st season. Kristina Kusa (Peter Pan) and Kerri Roberts (West Side Story) reprise their role as the nanny in charge, Mary Poppins, with Jeremy Hansard (Into the Woods) as the endearing chimneysweep Bert. Juliet Gregg (Matilda) and Ellie Roberts (Frozen Jr.) bring the very best of sass as Jane with Kyran Burkett (Newsies) and Jack Seezen (Willy Wonka) following close behind as Michael. Patrick McCormick (Mamma Mia) seemingly rules the household as George Banks while Megan Douthitt (Matilda) is caught in a struggle between playing wife and being her true self as Winifred Banks.

Come “Step in Time” with our “Supercalifragilisticexpialidocious” cast of 50+ who will show you that “Anything Can Happen If You Let It.”

Check out the performance dates for our two fantastic Marys and our talented youth ensemble.

Mary Poppins is sponsored by: