“A stage society has been organized in Columbia for the purpose of encouraging and developing musical, vocal, and dramatic talent in this city and to furnish entertainment to those who enjoy these things but do not care to take an active part in them.”

Thus began a run of family-oriented entertainment at Town Theatre that continues to thrive today. The founders of the Town Theatre were not professional producers, directors or actors. They were a group of families who dreamed of a new concept for Columbia: a theatre where they and their families could not only watch plays, but also take part in them for fun and learn from the experience. This commitment to presenting plays and musicals of wide general appeal has earned Town Theatre the largest regular audience of any cultural performing organization in Columbia. In fact, each season brings in close to 30,000 theatre patrons of all ages.The actual Town Theatre building was constructed in 1924. It is the oldest communitytheatre building in continuous use in the United States and is listed in the National Register of Historic Places. Town Theatre has one of the largest auditoriums of any Columbia theatre group. 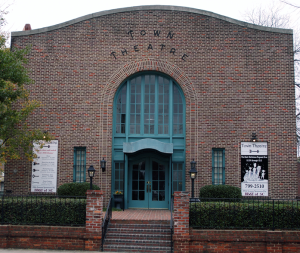 In 1993 the theatre unveiled a $1.2 million renovation which included opening the lobby completely to its two-story height to highlight the famous front arched window; improving backstage facilities for the actors and stage crew; and installing a counterweighted rigging system used in professional theatres that allows scenery to “fly” in and out from the loft, speeding up scene changes and allowing for more variety in stage backdrops.Town Theatre provides an exceptional opportunity for entry level actors by giving them the chance to work on stage with experienced veterans, many of whom are working professionals volunteering their time. Many of Town Theatre’s current and alumni performers have appeared on Broadway, network television and in major feature films. They include Cats, A Chorus Line, Ruthless People, Hill Street Blues, and North and South.

Every performance has open auditions, with all community members being encouraged to attend. There is also ample opportunity for members of the community to get involved behind the scenes. The Columbia Stage Society offers opportunity and experience in theatre to its members, many of whom participate not only as actors but as costumers, set and backstage crew, as well as helping in the box office, or as ushers and house managers.